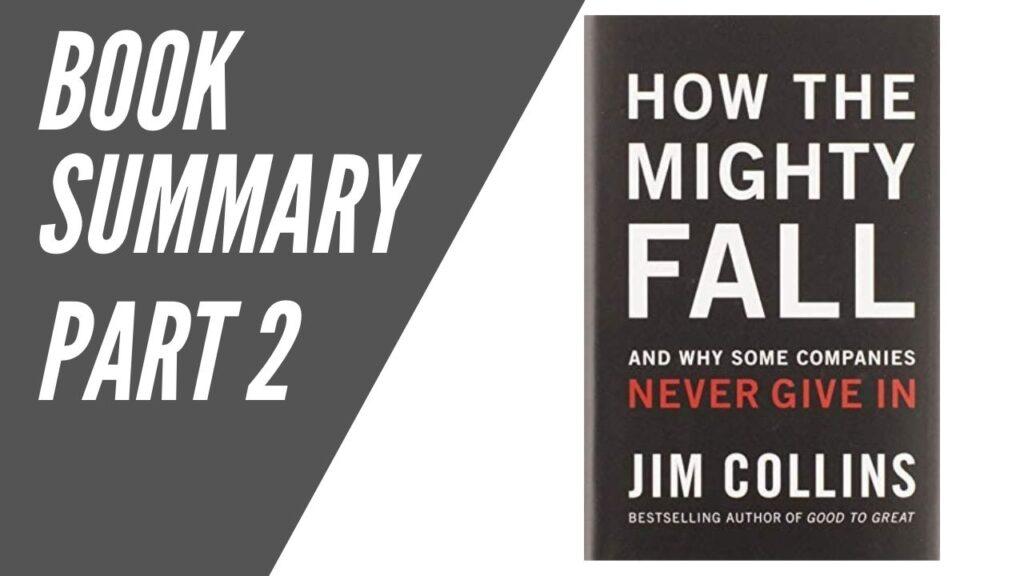 This article is part 2 of what I wrote a week ago on “How the mighty fall”. This article serves to help you understand how mighty and big companies fall and what you can do about it.

Stage 3: Denial of Risk and Peril

As companies move past stages 1 and 2, they will fall deeper into Stage 3 when they begin to ignore accumulated warnings. They tend to overlook obvious data that something is not doing well in their new ventures and believe that things will get better. They continue to bet big on the new ventures while denying the cracks of risk and peril.

Collins shares about how the leadership plays a part in the growth or decline of an organization.

Leadership-Team Dynamics: On the Way Down versus On the Way UP (Taken from Page 77)

In seven out of the eleven cases, Collins found evidence of externalizing blame during the era of decline.

CEOs blame a huge range of factors like the environment, inflation, company hit by strikes, unfair competition and ignorance. While it is true that these factors hit the company hard, the company’s denial of it made it much worst.

Here are the indicators for Stage 3:

Companies at this stage know that they are in deep trouble and its board of directors look to a new fast moving CEO who will launch a new vision, be the messiah that will save the day. Some look to a dramatic cultural revolution, game changing acquisitions or a number of sliver bullet solutions.

HP exemplified stage 4 behaviour when it launched a conversational $24 billion merger with Compaq. It was a sliver bullet move, hoping that it will be the game changer and rescue them out of their woes.

Behaviours that can exemplify stage 4 or reverse the downward trend

Every company in Collins’ study indicated late stages of decline that made them grasp for at least one sliver bullet. The stage 4 behaviour worsened the situation these companies are already in. Collins also found out that eight out of the eleven fallen companies in the analysis went for an outside CEO during their era of decline, which usually worsened under saviours from the outside.

Here are the indicators for stage 4:

Stage 5: Capitulation to Irrelevance or Death

Collins remarked that no company that they have studied fell into Stage 5 and each company made their different decisions to reverse its downward slide. By the time a company has moved from stage 1 to 4, those in power can be exhausted, dispirited and eventually abandon hope. Some of the leaders just sell out, in other cases, the organization spirals down to utter insignificance or dies out right.

Zenith Corporation held onto dominant positions in television and radio. For every dollar invested in Zenith at the start of 1950 and held through to 1965 increased in value more than one hundred times, generating cumulative results ten times more than the market. However, over time, Zenith faced problems and threats from the Japanese who were building better television sets at lower cost. They brushed it aside believing that the Japanese were not able to build quality products (stage 1). In addition, leadership succession problems helped to plague the company when a chosen successor died (stage 2).

Zenith also blamed external problems such as the struggling US economy, labour unrest, oil shocks and so forth, rather than confronting its lack of competitiveness (stage 3). Profitability ratios went down to levels not seen in thirty years. The lack of a specific plan and leap into all kinds of opportunities like VCRs, videodiscs, telephones linked to televisions, home security video cameras, cable TV decoders and computers, drove its debt-to-equity ratio to 140 percent (stage 4).

In their grasp for salvation, Zenith stumbled upon a new opportunity that made them great again. They became the number two maker of IBM compatible personal computers. However, even with their success, they were dragged down by their television business, which deteriorated their financial position and cash on hand dropped to five percent of current liabilities. This lead to the selling of Zenith to Bull Corporation.

How do you recover when your organization faces decline?

Collins shares his insights on how you can make a difference by the following methods: