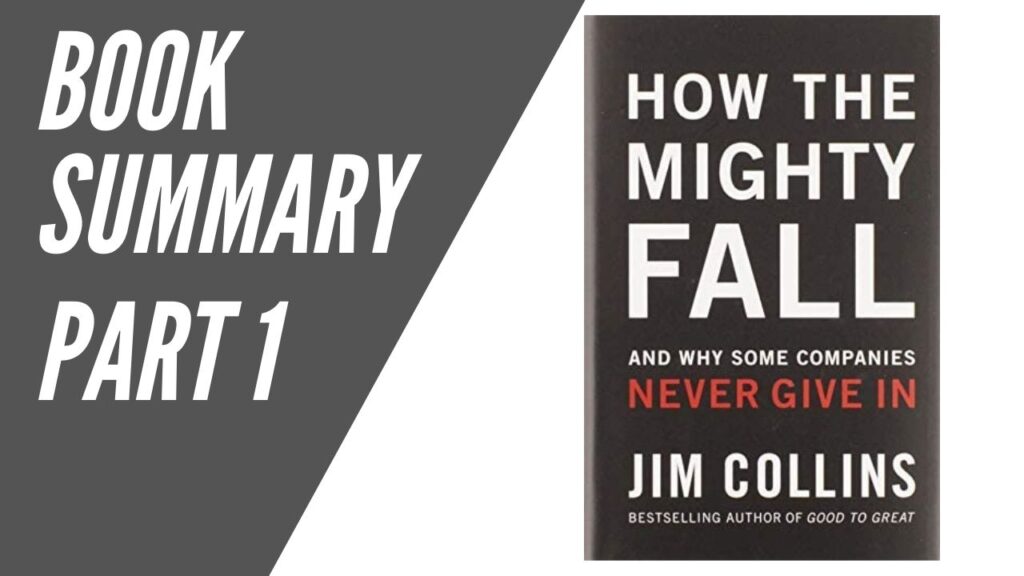 Over the long holidays, I took the liberty of reading How The Mighty Fall by Jim Collins. It always intrigued me to find out how large companies, with rich history and successful businesses can actually slowly reach to a stage of decline. I mean these are companies who are well known and have brilliant staff working with them, and yet can catapult into oblivion.

Overview of How The Mighty Fall Book

This shows that companies, no matter how successful they once were, can slowly or quickly spiral towards its destruction if they are not careful. By learning how the mighty fall, we can start asking better questions like how can decline be avoided? What are the stages of decline? How can my company reverse course?

In Collin’s research project of more than four years, he has uncovered five stages of decline that is consistent with the studied companies:

Stage 3: Denial of Risk and Peril

Stage 5: Capitulation to Irrelevance or Death

Companies that were evaluated based on the criteria that Collins and his research team had were the following:

Not all of them fell into bankruptcy, but a lot of them fell to stage 4, with except of Merck. In is important to take note that at the point of writing the book, HP and Merck might have already reversed their steep decline and show improved results.

Here are the explanations in greater detail of every stage:

Pride comes before destruction. Stage 1 starts when people become complacent with their success and sees success as an entitlement. They fail to remember what made them great and take it for granted that what has worked before could work again. They make statements like “We’re successful because we do these specific things”. Instead they should be focusing on “We are successful because we understand why we do these specific things and under what conditions they would no longer work.”

Collins cites the story of Motorola who invented StarTAC cell phones, which were the smallest phones in the world, using analog technology where digital slowly became the next wave. Motorola became arrogant and did not listen to the market, stating that “43 million analog customers can’t be wrong.” Their arrogance gave their competitors a growing market share and they fell from being the number 1 cell phone maker in the world to only having 17% share by 1999. By 2003, the number of employees dropped to 88,000- losing nearly 60,000 jobs from their 2001 figures.

Here are the indicators for Stage 1:

Reeking in their pride, companies pursue new ventures which promise better revenue and growth. There is nothing wrong with that, the problem is that it is done at the cost of reducing their focus on their core business and what made them successful. They started to pursue more and more new ventures that could generate money, without growing their team with the right people for the growth.

Rubbermaid aimed at introducing new products everyday, 365 days a year, while entering a new product category every twelve to eighteen months. Growth will come from doing a lot of new things, new geographies, new technologies, new joint ventures and new product innovations. The constant press and drive towards growth made Rubbermaid unfocused. For the first time in 1995, it reported its first loss. By then, the company closed six thousand product variations, nine plants and 1170 jobs.

Here are the indicators for Stage 2:

1. Excessive growth that is not sustained will lead to the breaking point in an organization.

2. Undisciplined discontinuous Leaps: The enterprise makes dramatic moves that fail at least one of the following tests:

a. Do they ignite passion and fit with the company’s core values?

b. Can the organization be the best in the world at these activities or in these arenas?

c. Will these activities help drive the organization’s economic or resource engine?

3. Easy cash erodes the discipline that sustained the company in the first place.

4. The company becomes bureaucratic and people increasingly thinks of jobs rather than responsibilities.

5. Poor succession planning and inability of grooming next generation leaders.

6. Excessive focus on personal interests or ego, rather than what is good for the company in the long term.

PS: I will post part 2 in the following week.