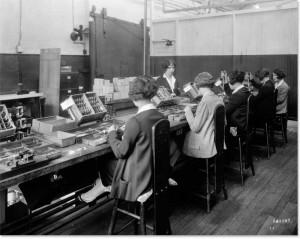 In 1924-1932, a series of experiments were conducted to examine how fatigue, monotony and supervision on an assembly line affected productivity. However at the end of the experiment, researchers were amazed to find out many other correlations that affected employee productivity and morale.

Many of their insights and observations are still used by today’s management. What they have discovered decades ago will be to increase productivity of your team today.

The name of this experiment is called ….

This experiment was carried out at Hawthorne Works, a factory that produced electrical components and equipment. It was one of the state-of-the-art factory of its time where over 40,000 people worked there. Hawthorne Works also pioneered many quality control practices and principles.

In all the experiments, an observer sat and watched a particular control group. In some of the experiments, changes to the illumination of the room were made. In another, conditions of the work environment constantly changed. In fact, it was changed 23 times. Changes included introduction of 2 five minute breaks, more breaks being subsequently added, breaks were lengthened to 10 minutes, food was given during breaks and staff were being dismissed half an hour earlier and then 1 hour earlier. In most cases, output generally increased.

What was interesting was even when conditions were worse off at some time, production generally increased. The amazing thing was that when these privileges were taken away and workers resumed their normal working conditions, output was increased by 25%. What was more interesting was that the team had no supervisor and they assumed personal responsibility for their work and output.

Here are some of the findings of the Hawthorne Experiment:

1.    The simple fact that the participants were asked to be part of an important experiment, created better attitude within them. They considered themselves to be an important group because their views were constantly sought after by the company.

2.    There is an eager desire within each person for cooperative activity…. and can be utilised by intelligent and straight-forward management.

3.    Consultation between management and employees gave a sense of belonging to the company. This helps people to take ownership of what they do.

4.    When employees form a social atmosphere in the work environment (which also included the observer), they tend to be more motivated.

1.    Giving your staff specialised training or verbal appreciation will help them work harder and increase their motivation.

2.    Getting people to work in small teams helps to improve performance if the team is harmonious and dedicated.

3.    Giving a sense of freedom to staff without a need for micro-management will tend to yield ownership in their work. Frequent interaction between management and staff is also a crucial contributing factor.

4.    Creating an environment where there is a social factor is also important to staff motivation. There is a need to change some management’s thinking that fun or social relationships should not take place in work environments. It does add to your bottom line when you have employees who feel a sense of belonging to the company.

PS: I would love to hear your comments. Do let me know what you think! If you have other reasons, do share them in the comment link above this article.