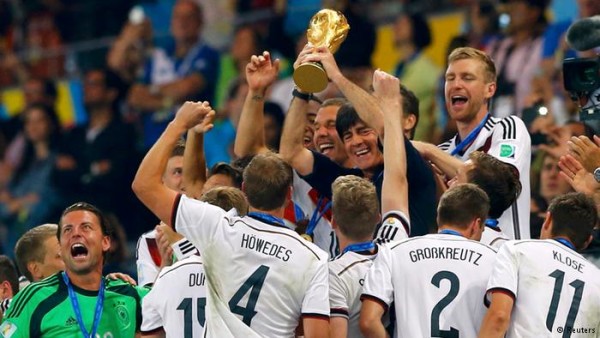 UPDATE: The article you’re going to read right now has been featured on Singapore’s Straits Times RECRUIT section, on 24th July 2014. If you would to read a copy of the Straits Times version, you can click on the news article image below or download it here.

(Copyrights belong to The Straits Times)

Although the World Cup 2014 just ended recently and the world slowly goes back into full swing of work, there are tremendous lessons on leadership to be gleaned from this beautiful sport.

1. The focus is on the team, not the individual.

One of the reasons why Germany won the World Cup 2014 is because every player is not indispensable and can be replaced in event of injuries or poor performance. In other competing teams, they will usually rely on single star players to raise the performance of the whole team.

For example, Brazilian star player Neymar was injured in the quarter-final match against Columbia and was unavailable of the rest of the tournament. Prior to his injury, he has contributed 4 goals and 1 assist. However, the over-reliance on him led to a drop in their game play, as they only managed 1 goal in the subsequent matches against Germany and the Netherlands.

Germany never had this problem with their team. Although, they had their own star players, but it is never about the individuals. It is about the whole team. They did not rely on individual players to score the goals. If their World Cup record goal scorer Miroslav Klose did not score the goals, someone like Thomas Muller or Mario Goetze (as he did in the Final) will.

“Whether we have the best individual players or whatever does not matter. You have to have the best team,” said Philipp Lahm, Germany football team captain after his side lifted the World Cup 2014.

2. Leaders always focus on building the team, not on themselves.

The coaches of the Germany and Argentina, Joachim Löw and Alejandro Sabella were rather unassuming and in most people’s opinion; not very charismatic. When you are a popular personality, you tend to spend an enormous time handling public relations with the press, interviews and also the tremendous amount of stress coming out from the expectations from your country.

However, Löw and Sabella were not distracted by all the media attention but channeled all their attention to building up the team.

3. Leaders always focus on their best chances to win.

Goalkeeper Tim Krul (No.23) replaces Jasper Cillessen (No.1) in the 120th minute in the match against Costa Rica.

In the match between Netherlands and Costa Rica, both teams battled with all their might and the match was drawn to extra time because both sides could not score the winning goal. The matched ended off with a penalty shoot out.

Netherlands coach, Louis van Gaal, did something unusual. He brought in substitute goal keeper Tim Krul at the 120th minute. Krul became a hero when he saved two penalty kicks and sent his country to the semi-finals.

The big question after the match was not about the Netherlands’ hard-fought victory, but about Tim Krul’s tactical substitution as no team in the World Cup did a last-minute goalkeeper substitution before.

When interviewed, Louis Van Gaal revealed that Krul’s substitution was all along planned as he knew he has ‘bigger reach’ and is a known ‘penalty killer’. He understood the strengths of each goalkeeper he had in his team, and knew when to play his trump card when the opportunity arises.

4. Leaders inspire members to be the best they can be.

Germany coach Joachim Löw giving Mario Goetze a pep talk before his substitution in the World Cup Final against Argentina.

Germany coach, Joachim Löw told 22-year old Mario Goetze, “Go out there and show the world you are better than Messi” minutes before he scored the goal that won the World Cup. There is no way Goetze will be even as close to the Argentina superstar Messi at the club level but Löw believed in him and he delivered one of the best goals of the tournament.

Leaders believe in their members and sets them free to be the best they can be. It is this confidence that helps inspire team members go all out to do their best.

In conclusion, talents are only good when they play well in a team and not as individuals. I thought that this picture from the internet sums it all.